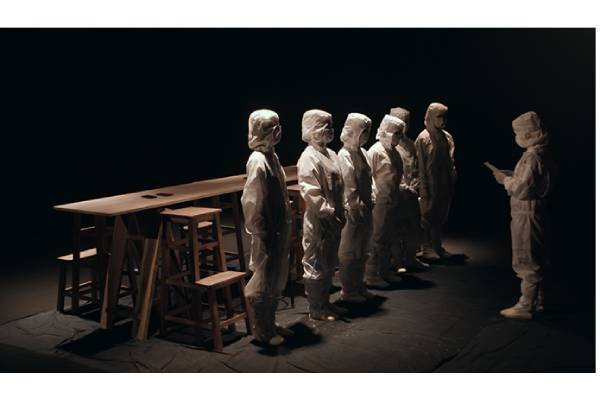 SHE – Sunny Side ’22: Doc conference wraps up by naming pitch contest winners – Realscreen

by Andrew Jeffrey on REALSCREEN

Sunny Side of the Doc wrapped up its annual four-day event, the 33rd iteration of the international documentary marketplace, by unveiling its pitch-session award winners on Thursday (June 23).

The eight pitch sessions, which were held before high-level decision-makers including streamers, major broadcasters, foundations, sales agents and other investors, involved 48 projects from 22 countries. The various sessions covered history, science, global issues, wildlife and conservation, and arts & culture docs, as well as sessions for digital narratives (including documentary projects for various digital platforms), projects from new voices and immersive experiences.

Sunny Side of the Doc, which operated as a hybrid event both in person and online, saw more than 2,000 participants this week from 67 countries, the most ever represented in the history of the event.

The conference saw industry professionals from companies such as PBS, France Télévisions, Arte, NHK, Telefilm Canada, Docu Box Nairobi, Rai, Sodec and Canal+ Group offer insight into their companies and the state of the industry. The event also included a talent hub highlighting and supporting the work of Ukrainian producers and directors and facilitating global connections to the industry.

“The documentary genre is recovering from the health crisis more slowly than others. We must now find spirited ways to collaborate internationally, to be able to meet new partners, not only for funding opportunities but also for the creative side too. This is the challenge for a marketplace like Sunny Side of the Doc, and what also makes it so important for the sector,” said Mathieu Béjot, director of strategy and development at Sunny Side of the Doc.

The winners of the pitch session competitions are listed below, along with statements from each pitch session’s jury. Each winning project received 3,000 euros as a prize. Loglines are supplied by Sunny Side of the Doc.

Logline: Would you take a Class A substance to cure your lifelong mental health trauma? As cultures converge, we investigate whether the traditional South American brew — Ayahuasca — may help to address some of the fundamental flaws in Western mental health models.

Jury’s statement: “We’re really impressed by the presentation and pitch video, which has a unique and fresh approach. This is great timing to tell this story about the medical use of psychedelics as it’s on the rise.”

Logline: Stories of exploitation and patriarchy in the largest electronics industrial plant in the world, in Vietnam.

Jury’s statement: “The jury thinks the way SHE [pictured] unveils timely themes such as women’s rights, equal pay, economic migration, Western responsibility and patriarchal systems is essential. We acknowledge the quality of the development work undertaken and the access gained in this process. SHE gives a fresh look on the topic with creative use of cinematography and with the experimental staging of work in the factory.”

Logline: What brings us together as humans? How do we celebrate life, love, beauty, death? With these questions in mind and her camera in hand, Spanish photographer Cristina García Rodero continues to travel the world alone at 72 to capture the strikingly different ways in which humans engage in rituals, festivities and celebrations.

Jury’s statement: “We felt completely immersed in the world of the photographer. The story was very inspiring, with a female filmmaker talking about the work for an older female artist. This pitch was not only about celebrating art but also a celebration of life, revealing a little-known photographer [to] the international market.”

Logline: A new, limited three-part series about breaking barriers to share in the wonder of the ocean. Africa’s largest estuarine system and a World Heritage Reserve, Isimangaliso is home to a healthy reef system, migrating whales, sharks, turtles, and the habitat of the documentary’s subject: the Blue Streak Cleaner wrasse fish.

Jury’s statement: “The statement at the start of the pitch — ‘The African wildlife filmmaker is rarer than some of the species that conservationists are trying to protect’ — is impactful and troubling. We were compelled by the authenticity of the pitch, which we consider to be well-prepared, creative, fluent and joyful.”

Logline: During the military dictatorship in Brazil (1964-1985), a Nazi war criminal established a security division inside a Volkswagen plant in São Bernardo do Campo. The company collaborated with the repressive forces to persecute, arrest and torture workers. More than 40 years later, Volkswagen finally admitted its responsibility for human rights violations.

Jury’s statement: “A very original project on a not-well-known story. It mixes archives, investigation, incredible characters and questions [about topics] which resonate today.”

Logline: Two survivors of the Christchurch mosque attack, Iraqi immigrant Adeeb [and] his son, Ali, take us on their 24-year-long search to find a safe home for their family.

Jury’s statement: “A great story is told through the eyes of an ordinary family. The director broadens the story to larger issues in the world. The story covers the situation in the Middle East over the past two decades. It is authentic, complex and layered, which includes religion, migration and war combined well with personal archives. More importantly, it is a beautiful journey in finding peace and tranquility.”

Logline: A Very Hot Summer in New York City is an eight-episode podcast series about the last international sex scandal before #MeToo: “l’affaire DSK” (the DSK case). An immersive documentary thriller questioning how the story about sex and power is told, and should be told.

Jury’s statement: “It’s the perfect use of the audio format, utilizing an impressive collection of archive to delve back into a fascinating story. We can definitely see it really resonating with audiences, especially in the current social climate and I’d be excited to listen to it.”

Logline: Jacob’s Journey is part of an interactive virtual reality documentary capturing the stories of Holocaust survivors. It features Jacob Goldstein, a 94-year-old from Lodz, who survived the Nazi concentration camps.

Jury’s statement: “The jury decided to give the prize to Jacob’s Journey given the relevance of the topic and the time-sensitive nature of its development. This next generation will be the first to no longer have a family member that lived through the Holocaust, and the use of VR will help preserve this necessary testimony. We are convinced that this prize will allow us to highlight this project and help bring it to fruition.”

SHE leads Sunny Side of the Doc winners – Variety previous post

Sunny Side of The doc – 3 questions to Parsifal Reparato, Director at AntropicA next post

Sunny Side of The doc – 3 questions to Parsifal Reparato, Director at AntropicA